The benefit of energy cooperation in fostering ecoregions across Europe 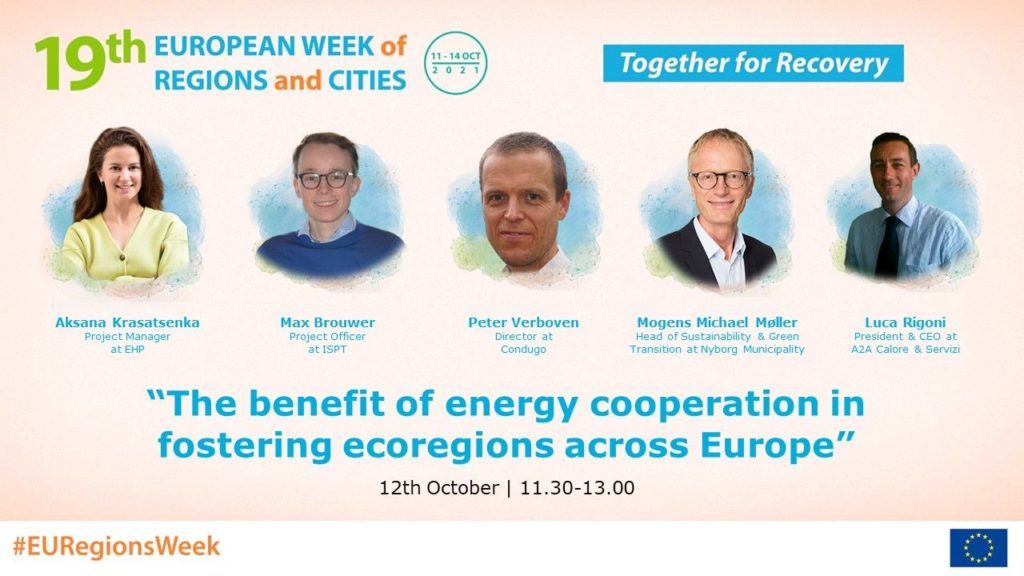 The R-ACES project organised an online workshop during the European Week of Regions and Cities on 12 October 2021. In total 36 participants from different sectors and European regions joined the presentations and discussions on the benefits of implementing energy cooperation across Europe.

The European Week of Regions and Cities is an annual four-day event during which cities and regions showcase their capacity to create growth and jobs, implement European Union cohesion policy, and prove the importance of the local and regional level for good European governance. The themes for the 2021 edition are Green Transition, Cohesion, Digital Transition & Citizens Engagement.

In frame of the theme Green Transition, R-ACES consortium partners under the lead of the Lombardy Energy Cleantech Cluster held a workshop with the focus on ecoregions. An ecoregion is an area where energy, material and information are exchanged between various companies and actors to reduce waste and energy or material consumption. Each region is centred on an (eco-) industrial park or (eco-) business park, linked to its surroundings by a 4th or 5th generation district heating/cooling network. In these ecoregions heat and cold are exchanged, smart energy management systems are incorporated, and renewables are used. This enables the reduction of greenhouse gas emissions by at least 10%.

Central to the workshop were the presentations of the R-ACES pilot ecoregions in Antwerp, Belgium, Nyborg, Denmark, and Lombardy, Italy. The presenters shared their experiences and best practices setting up energy cooperation projects in their regions. Participants gained valuable insights in approach, economy of scale, legal aspects, and stakeholder involvement. During the question & answer sessions open questions could be solved and interests from other regions in energy cooperation was expressed.

Peter Verboven, director at Condugo, showed for the pilot of ecoregion Antwerp that building energy clusters works better if you do it bottom-up.

The City of Nyborg is heated 96% by industrial heat from local companies. The symbiosis has been developed over several decades and includes the balancing of the companies’ production with heat demand from the city, according to Mogens Michael Møller, Head of Sustainability and Green Transition at Nyborg Municipality in Denmark. The next step in the symbiosis is to not only exploit the excessive heat from the industries, but also to reduce the CO2 emissions from the same industries.

Luca Rigoni, President & CEO at A2A Calore & Servizi in Italy, stated that “District Heating is an important enabler of waste heat recovery and a key player to reach the decarbonisation targets of the industrial sector”.

The talks about the regions were framed by an introduction to industrial symbiosis and energy cooperation from the moderator Aksana Krasatsenka from Euroheat & Power and by the presentation of Max Brouwer from ISPT about the R-ACES approach and tools. R-ACES established a set of three specific tools embedded in selected support actions: a self-assessment tool, legal decision support tool for joint contracts, and a smart energy management platform for clusters. Brouwer stresses that “Industrial sites and business parks are key in initiating and accelerating energy exchange inside a region. Therefore, we established these practical tools to support energy cooperation in the ecoregions.”

The tools and additional information about the R-ACES project are accessible on the website www.r-aces.eu 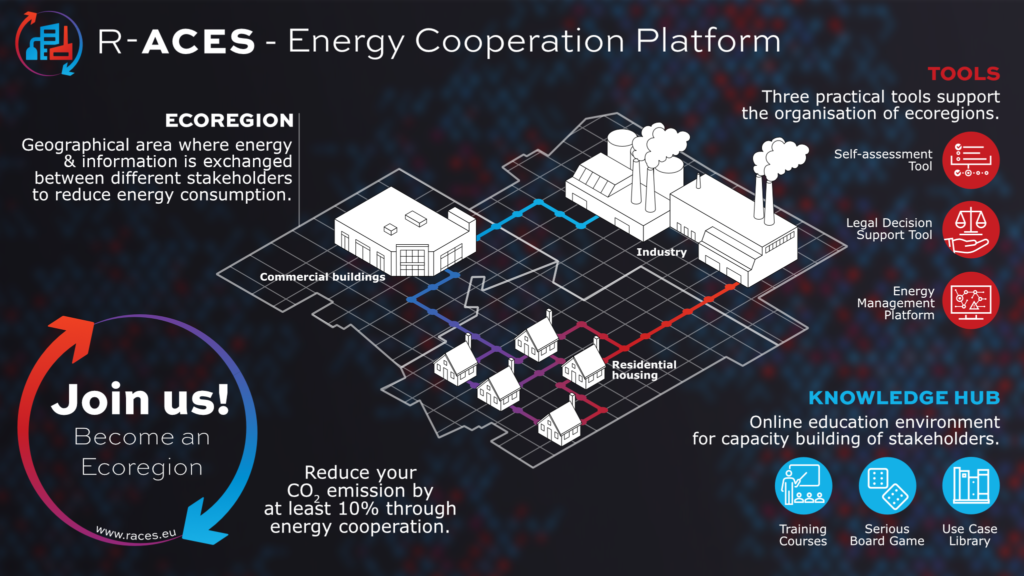 Experience the #EnergyManagement Platform and the #wasteheat and cold matching platform in 1 day using your own data!

We create ecoregions where heat/cold is exchanged, smart energy management systems and renewables are used to reduce emissions by at least 10%.

The dissemination of any results reflects only the author’s view. The Agency and the European Commission are not responsible for any use that may be made of the information it contains.